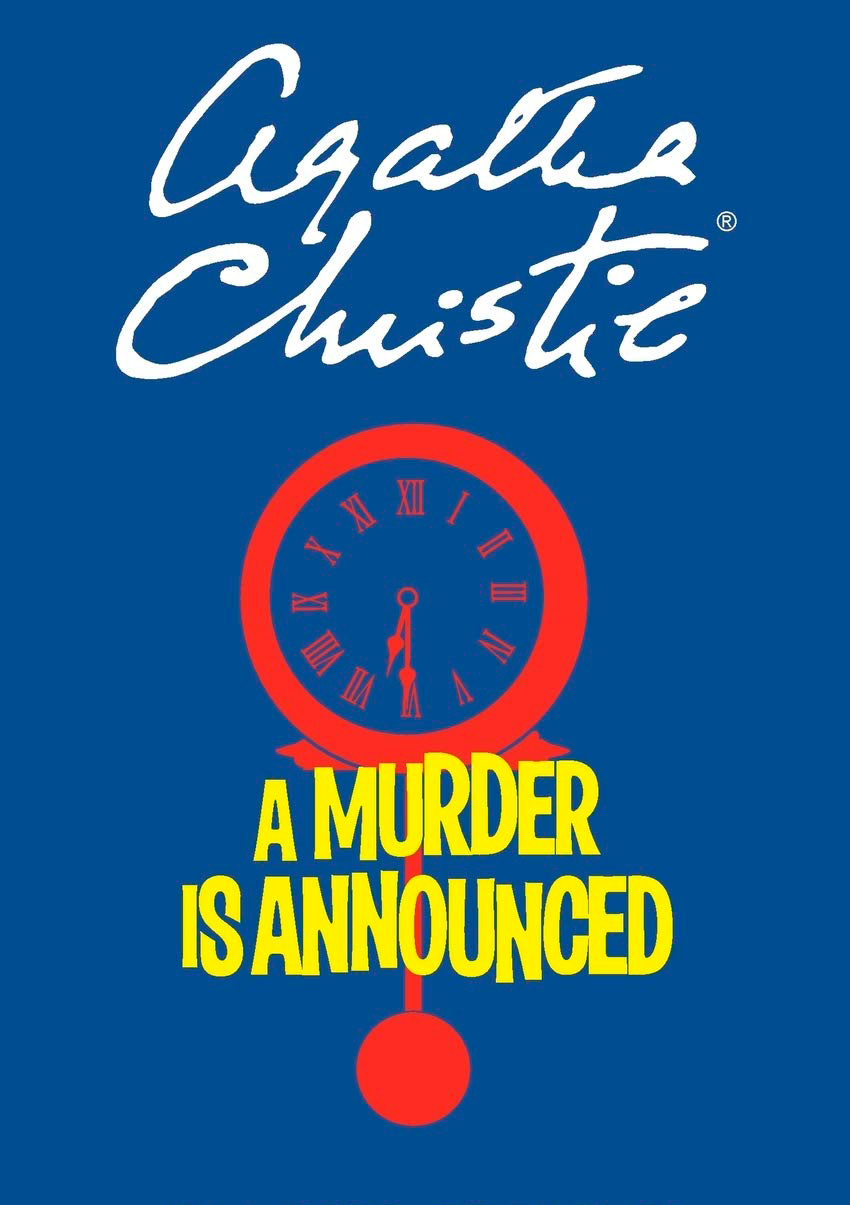 A Murder is Announced

A strange notice appears in the morning paper of a perfectly ordinary small English village, Chipping Cleghorn: “A murder is announced and will take place on Friday, October 29th, at Little Paddocks, at 6:30 p.m. Friends accept this, the only intimation.” This comes as a great surprise to Letitia Blacklock, the owner of Little Paddocks, as she has no idea what the notice means; she didn’t place it and none of her companions knows more than she. Miss Blacklock decides to take it in her stride and prepares herself to have guests that evening.

Naturally, the villagers are intrigued by this notice, and several of them appear on the doorstep with awkward reasons but a definite interest. As the clock strikes 6:30, the lights go out and a door swings open, revealing a man with a torch.

In a heavily accented voice, the man demands they “Stick ’em up!” Most of the guests do so, believing it to be part of a game. The game ends when shots are fired into the room. The door slams shut, and panic takes hold: in short order, it’s discovered that the fuses are blown, the gunman has been shot, and Ms. Blacklock is bleeding from a bullet’s near-miss. The most curious thing of all is the gunman: he is recognized by Dora Bunner (an old friend of Letitia’s, affectionately known as “Bunny”, who also lives at Little Paddocks) as Rudi Scherz, the receptionist at a local spa, who had asked Letitia for money just a few short days ago.

The police are called in. All clues suggest that the case is merely a strange suicide or accidental death, but Inspector Craddock is uneasy about both possibilities. As luck would have it, Miss Marple is a guest at the very same spa where Rudi Scherz was employed. Craddock is advised to involve her in the case, and the two commence working together. At the spa, it emerges that Rudi has a criminal background, but petty theft and forgery rather than any more serious crime. His girlfriend, a waitress at the spa, however, reveals that not only had he been paid to appear, he believed it was all “a silly English joke”: clearly he was not planning on being shot at.

With this new knowledge, Craddock returns to Chipping Cleghorn. Miss Marple, not uncoincidentally, is the godmother of the local vicar’s wife, and decides to stay with her.

The first step is to establish a motive for Scherz’s attack on Miss Blacklock. This presents a problem: Letitia has no known enemies. She worked for a successful financier (Randall Goedler) and has done quite well for herself but is not herself wealthy. She does not lead a lavish life as aside from her house, she has only enough to live on. However, she may shortly come into a great deal of money; Randall Goedler’s estate passed to his wife, Belle, when he died. Belle is frail, and is now very near death. When Belle dies, Miss Blacklock inherits everything. If, however, she predeceases Belle, the estate goes to the mysterious “Pip” and “Emma”, children of Randall’s estranged sister, Sonia. No one knows where these two are, much less what they look like.

Inspector Craddock discovers oil on the hinges of a door into the parlor (where the shooting took place) thought to be unused, and Bunny mentions that until quite recently there had been a table placed against the door.

Inspector Craddock travels to Scotland to meet Belle; she mentions that Letitia had a beloved sister, Charlotte, who was born with a goitre. Their father, an old-fashioned doctor, tried unsuccessfully to treat Charlotte, but she only withdrew further into herself as her goitre got worse. Their father died shortly before World War I, and Letitia gave up her job with Goedler and took her sister to Switzerland for the necessary surgery to repair the defect. The two sisters waited out the war in the Swiss countryside, but before it was over, Charlotte died very suddenly. Letitia returned to England shortly thereafter.

Miss Marple takes tea with Bunny during her shopping trip with Letitia, and Bunny reveals several details about the case: she talks about the recently oiled door she found with the Inspector; she’s sure that Patrick Simmons is not as he appears; and, most tellingly, she’s absolutely positive there was a different lamp in the room on the night of the murder (the one with the shepherdess and not with the shepherd) than there was now. Their tête-à-tête is interrupted, however, as Letitia arrives, and she and Bunny resume their shopping.

That evening, Letitia arranges a birthday party for Bunny, complete with all Bunny’s friends and even a chocolate cake; this was while rationing was still in effect in England–butter and eggs were hard to come by even in a rural community, and chocolate was quite rare. Afterwards, Bunny complains of a headache and goes to bed after taking some of Letitia’s aspirin as her own bottle of aspirin bought that morning seems to be missing. Bunny dies from poisoning in her sleep.

Miss Marple visits Ms. Blacklock who mourns Bunny and starts crying. Miss Marple asks to see photo albums which might contain pictures of Sonia Goedler, Pip and Emma’s mother, but all photos of Sonia were taken out of the albums recently, although they were in place before the death of Rudi Scherz.

Through deduction and reenactment, Misses Hinchchliffe and Murgatroyd (two spinster farmers who were also present at the time of the Scherz murder) figure out that Miss Murgatroyd could see who was in the room as she was standing behind the door when it swung open; she couldn’t have seen Rudi as he was on the other side of the opened door, but she could see whose faces were illuminated by the torch beam. The two women conclude that the person who wasn’t in the room (and therefore not seen by Miss Murgatroyd) could have snuck out of the room when the lights went out and come around behind Rudi, and shot at him–and Miss Blacklock.

Just as she remembers the one person not in the room, the stationmaster calls to notify them that a dog has just arrived. As Miss Hinchcliffe pulls away in her car, Miss Murgatroyd runs into the driveway, shouting “She wasn’t there!” She is murdered while Miss Hinchcliffe is away, and so does not reveal whom she did not see.

At Little Paddocks, Letitia receives a letter from the real Julia Simmons in Perth. She confronts “Julia” with the letter, and “Julia” reveals that she is actually Sonia’s daughter, Emma Stamfordis, masquerading as Julia so that she could attempt to gain a portion of the inheritance from Letitia and let the real Julia could spend time pursuing an acting career.

Julia/Emma insists she is uninvolved in the assassination attempt–she was a crack shot during the French Resistance and would not have missed at that range, even in the dark–nor did she wish to prevent Letitia from inheriting Randall Goedler’s estate. She had intended to integrate herself with Letitia and try to obtain a portion of the money, and once the murder took place, had no choice but to continue the masquerade.

Philippa Haymes (a boarder at Little Paddocks and a young widow) sneaks into the kitchen to speak to Julia/Emma, but Julia/Emma sends her away before finding out what Philippa had to say. That night, the vicar’s cat, Tiglath Pileser, knocks over a glass of water onto a frayed electrical cord, which causes the fuses to blow, and the final clue falls into place for Miss Marple.

Inspector Craddock gathers everyone at Little Paddocks and launches the final inquest, which is interrupted by Mitzi, Letitia’s foreign “lady-help”, crying out that she saw Letitia commit the murder. The inspector does not believe her, and continues with his questioning.

The inspector continues, and quickly inisinuates that Edmund is in fact Pip. However, Phillipa comes forward and confesses that she is in fact Pip; Inspector Craddock then accuses Edmund of wanting to marry a rich wife in Phillipa by murdering Letitia. Edmund denies this and as he does so, a terrified scream is heard from the kitchen.

veryone rushes to the kitchen and discovers Miss Blacklock attempting to drown Mitzi in the sink. Miss Blacklock is arrested by a local constable who has been hiding in the kitchen with Miss Marple, who imitates Dora Bunner’s voice to make Ms. Blacklock break down.

Miss Marple explains it quite simply: it wasn’t Charlotte who died in Switzerland, but Letitia. Charlotte, aware that Letitia was in line to inherit a fortune, posed as Letitia and returned to England; few people knew Charlotte, as she had been a recluse before leaving England and a slight change in Letitia’s appearance could be explained away to casual acquaintances by her time abroad during the war. She need only avoid people who knew Letitia well, such as Belle Goedler and to always cover her throat with strings of pearls or beads so as to hide the scars from her goiter surgery. Bunny was one of the few people who remembered Charlotte as Charlotte, but by then, Charlotte was so lonely that she allowed her old school friend to move in.

However, Rudi Scherz could have ruined everything: he worked at the Swiss hotel where the sisters had stayed and could therefore also identify Charlotte as herself. This is why Letitia/Charlotte hired him to come to Chipping Cleghorn and “hold up” a room full of guests: she blew the fuse by pouring water from a vase of flowers onto the frayed cord of a lamp, slipped out the second door, stood behind Rudi, and shot him. She then nicked her ear with a pair of nail scissors and rejoined the others, playing the part of perplexed host.

Bunny became the next target because she, too, could reveal too much. Bunny had an eye for detail, but was prone to slip-ups: on several occasions, she referred to Ms. Blacklock as “Lotty” (short for “Charlotte”) instead of “Letty” (short for “Letitia”), and her conversation with Miss Marple in the cafe proved fatal.

Miss Murgatroyd, the final victim, was also killed for guessing too much and for coming to the realization that Letitia/Charlotte was not in the room when Rudi Scherz burst in.

Mitzi and Edmund had been persuaded by Miss Marple to play parts in tripping Charlotte Blacklock up; Miss Marple’s plans were almost brought down when Philippa admitted to being Pip, but Inspector Craddock thought fast enough to turn around and claim Edmund was after Philippa’s money.

In the end, Phillipa/Pip and Julia/Emma inherit the Goedler fortune; Edmund and Phillipa/Pip get married and return to Chipping Cleghorn to live.