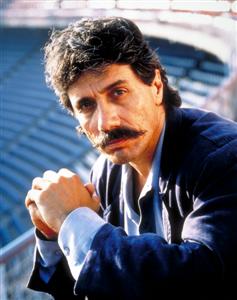 Known as the “Olivier of the Latino world,” Edward James Olmos is an individual flowing with talent and creativity. The multi-talented actor, producer, director, and community activist was born and raised in East Los Angeles, and spent many years in theatrical roles until his mesmerizing performance in the musical play Zoot Suit, which led to a Tony Award nomination. He later recreated the role for film, and went on to star in such films as Wolfen and Blade Runner. He then scored a personal success with his role as a Mexican cowboy in The Ballad of Gregorio Cortez, directed by Robert M. Young, who also directed Olmos in Saving Grace, Triumph of the Spirit, Talent for the Game, and Caught. Currently Olmos can be seen in current role as Commander Adama on the Sci-Fi series Battlestar Galactica.

In April 1999, Olmos launched a nationwide multimedia project called Americanos: Latino Life in the United States, a celebration of Latino culture through photography, film, music, and the printed word. The project was co-sponsored by Time Warner Inc., and designed to inspire Latino pride, and to build bridges among Latinos and others. Americanos included a five-year traveling photography exhibition organized by the Smithsonian Institution; a music CD featuring Latino artists; a documentary that aired on HBO; and a book co-edited by Olmos of essays, photos, and commentary by today’s most notable figures in the Hispanic community.

In 1997, Olmos starred as Abraham Quintanilla in the much-anticipated Warner Bros. feature film release of Selena. He also starred in the acclaimed film,12 Angry Men, for Showtime television, directed by William Friedkin.

In 1996, he starred in the ABC miniseries, Dead Man’s Walk, which was the prequel to Lonesome Dove. He also completed the movie The Limbic Region, and starred in the critically acclaimed Sony Pictures Classic thriller, Caught.

Olmos was honored with a Golden Globe Award and an Emmy nomination for his work in HBO’s The Burning Season, the story of the Brazilian political activist Chico Mendes. As a producer, he currently has a development deal with ABC.

Olmos completed four feature films in 1995: My Family/Mi Familia, directed by Gregory Nava; Mirage; Slave of Dreams, a Showtime Production; and Roosters, an American Playhouse Production. In 1994, Olmos played Jose Menendez in the CBS mini-series, Menendez: A Murder in Beverly Hills. He was also the executive producer of the award-winning NBC documentary, Lives In Hazard, which premiered that year. In 1992, he marked his directorial debut and starred in the powerful feature film, American Me, for his production company, Olmos Productions. In 1988, he received an Oscar nomination for his portrayal of Jaime Escalante, the eccentric but dedicated math teacher, in Stand and Deliver, which he also produced. Olmos also won an Emmy Award and a Golden Globe Award for his portrayal of Lt. Castillo on the popular television series Miami Vice.

While busy producing, directing and acting, Olmos also makes time to participate in many humanitarian efforts. He is a US Goodwill Ambassador for UNICEF, and a national spokesperson for organizations such as the Juvenile Diabetes Foundation. He has worked with David Rockefeller of the Rockefeller Foundation, and serves on the boards of many groups and organizations.

He is also the executive director of the Lives In Hazard Educational Project, a national gang prevention program funded by the US Dept. of Justice. He speaks at an average of 150 institutions each year. He also played an instrumental role in the cleanup efforts after the LA riots, the 1993 Los Angeles earthquake, and Hurricane Andrew in Florida.