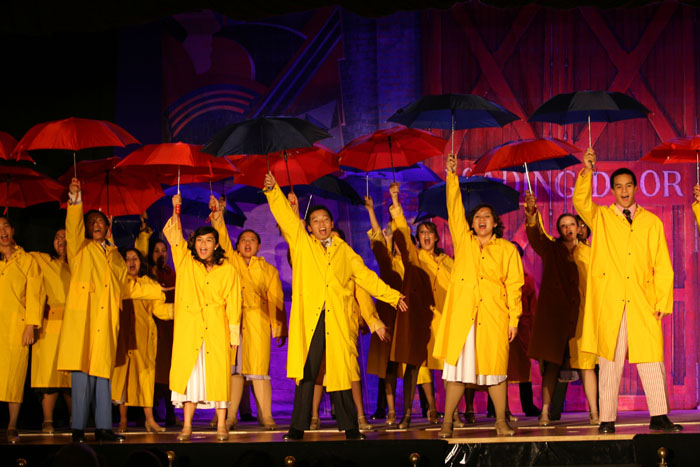 Singing in the Rain (Plains)

Don Lockwood (Ian Hopps) is a silent film star with humble roots as a musician, dancer and stunt man. Don barely tolerates his vapid leading lady, Lina Lamont (Kathleen Tenefrancia), who is convinced that their screen romance is real. After the first talking picture, The Jazz Singer, proves to be a smash hit, the head of the studio, R. F. Simpson (Patrick Guzman), decides he has no choice but to convert the new Lockwood and Lamont film, The Dueling Cavalier, into a talkie. The production is beset with difficulties, by far the worst being Lina’s comically grating voice.

After a disastrous test screening, Don’s best friend, Cosmo Brown (Jefrey Sabino), comes up with the idea to overdub Lina’s voice and they convince Simpson to turn The Dueling Cavalier into The Dancing Cavalier, a musical comedy film. Meanwhile, Don falls in love with an aspiring actress, Kathy Selden (Daphne Jane Dizon), who is providing the voice for Lina. When Lina finds out, she is furious and does everything possible to sabotage the romance. She maliciously demands that Kathy continue to provide her voice in all future films, but remain uncredited. An irate, but desperate Simpson is forced to agree; Kathy has no choice because she is under contract.

The premiere is a tremendous success. When the audience clamors for Lina to sing live, Don and Cosmo improvise and get Lina to lip-synch while Kathy sings into a second microphone while hidden behind the curtain. Unbeknownst to Lina, as she starts “singing”, Don, Cosmo and Simpson gleefully raise the curtain behind her, revealing the deception. Kathy becomes a star, and Lina is finished.