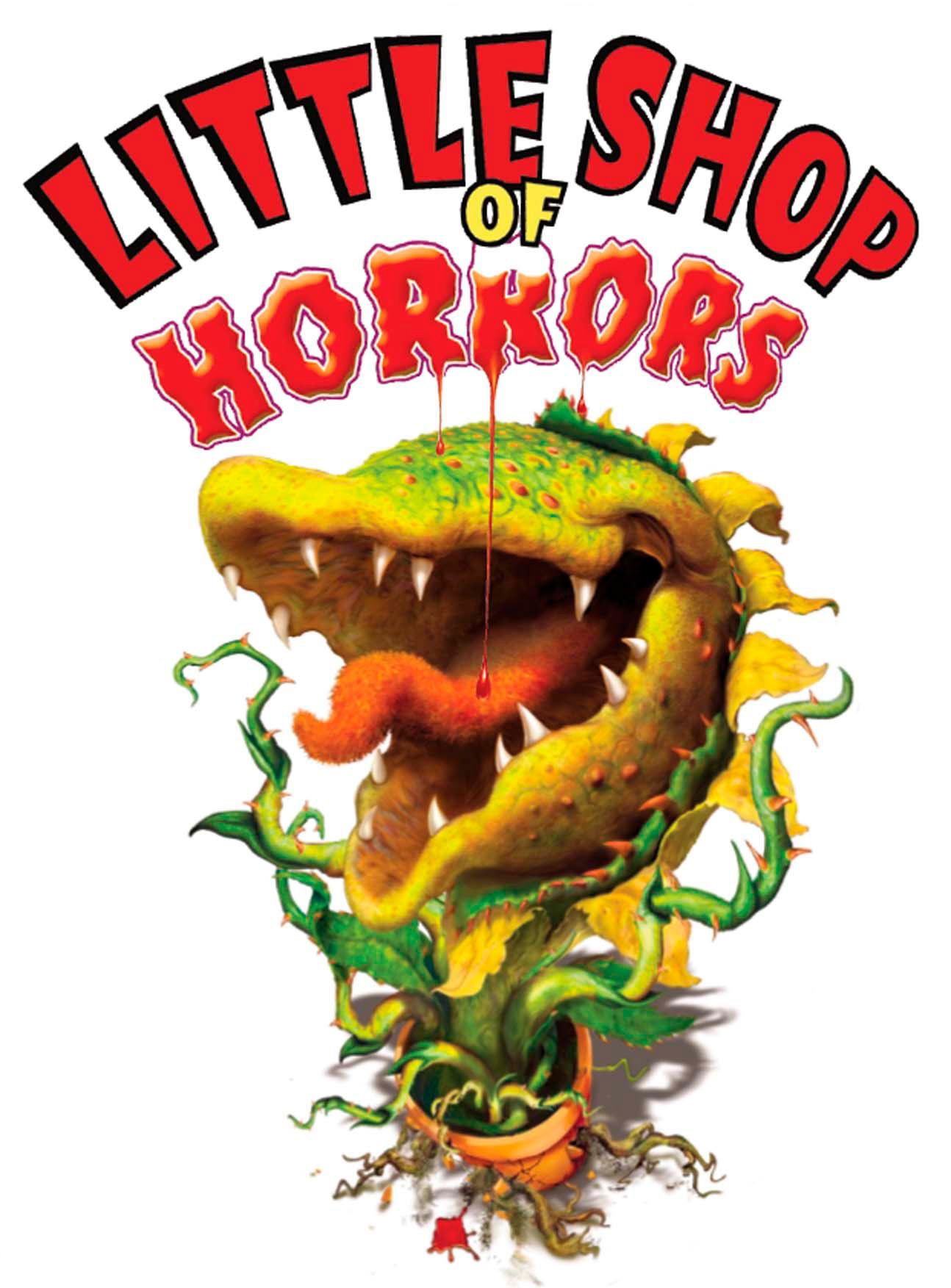 Crystal, Ronnette and Chiffon (characters named after female doo-wop girl groups in the 1960s), set the scene (“Little Shop of Horrors”). These three girls comment on the action throughout the show. Seymour Krelborn is a poor young man, an orphan living in urban skid row. Audrey is a pretty blonde with a fashion sense that leans towards the provocative and tacky. They lament their station in life and seek a life away from the urban blight (“Skid Row (Downtown)”). They are co-workers at Mushnik’s Skid Row Florists, a run-down flower shop owned and operated by the cranky and sly Mr. Mushnik. Seymour has recently obtained a mysterious plant that looks like a large venus fly trap. While he was browsing the wholesale flower district, a sudden eclipse of the sun occurred, and when the light returned, the weird plant had appeared (“Da-Doo”). Seymour is secretly in love with Audrey, and names the plant Audrey II in her honor.

The little plant does not thrive in its new environment and appears to be dying. Seymour questions why it should be doing poorly when he takes such good care of it. He accidentally pricks his finger on a rose’s thorn, which draws blood, and Audrey II’s pod opens thirstily. Seymour realizes that Audrey II requires blood to survive and allows the plant to suckle from his finger (“Grow For Me”). As Audrey II grows, the plant becomes an attraction and begins generating substantial business for Mushnik. Being the owner of the plant, Seymour has suddenly gone from loser to hero (“Ya Never Know”). Realizing that his sudden profitability is completely dependent on the plant (and therefore Seymour), Mushnik takes advantage of Seymour’s innocence by offering to adopt him and bring him on as a full partner in the business (“Mushnik & Son”). Having always wanted a family, Seymour accepts, not realizing he is being conned.

Orin Scrivello, a sadistic dentist, is Audrey’s abusive boyfriend. Modeled after the ‘leader of the pack’ characters of the 1950s, Orin drives a motorcycle, wears leather, and enjoys bringing other people pain (“Dentist!”). Meanwhile, the employees at Mushnik’s are sprucing up the flower shop, due to the popularity of the now large Audrey II, and the revenue it is bringing in (“Closed For Renovation”). Audrey reveals she is not happy in her relationship and secretly has feelings for the timid Seymour. She sings that her ultimate dream is to have the ideal suburban life with Seymour, complete with a tract home, frozen dinners and plastic on the furniture (“Somewhere That’s Green”).

Meanwhile, Seymour is having difficulty providing enough blood to keep Audrey II healthy. When Seymour stops feeding the plant, Audrey II reveals that it can speak (in a deep, demanding voice), and says that by feeding it, Seymour will ensure that all his dreams come true (“Feed Me (Git It)”). Seymour initially refuses, but then witnesses Orin abusing Audrey. The plant presents this as a justification for killing Orin. Not realizing he is being manipulated again, Seymour gives into his baser instincts and agrees. He sets up a late-night appointment with Orin, intending to kill him. However, Seymour loses his nerve and decides not to commit the crime. Unfortunately for Orin, who has been gassing himself with nitrous oxide, the gas device gets stuck in the ‘on’ position, and he overdoses while asking Seymour to help save him. Seymour lets the sadistic dentist die laughing (“Now (It’s Just The Gas)”). Seymour drags Orin’s body away, as the now huge Audrey II calls for more blood (“Act I Finale”).

The flower shop is busier than ever, and Seymour and Audrey are having trouble keeping up with the onslaught of new business (“Call Back In The Morning”). Audrey eventually approaches Seymour and confides that she is distraught by Orin’s disappearance and death, even though she realizes that dating him was another mistake in a long line of bad boyfriends. The two admit their feelings for one another, and Seymour promises that he will protect and care for Audrey from now on (“Suddenly, Seymour”). The two plan to leave together and start a new life, although Seymour mistakenly attributes Audrey’s feelings to his newfound fame, not realizing that she loved him even before, when he was just a shophand.

Before they can go, Mushnik confronts Seymour and accuses him of Orin’s death, saying he plans to turn Seymour in to the police. Audrey II tells Seymour that he has to get rid of Mushnik or he’ll lose everything including Audrey (“Suppertime”). Out of confusion and his love for Audrey, Seymour tricks Mushnik into thinking that the money he collected is inside Audrey II. As Mushnik searches for the money in the plant, he climbs inside and realizes he was tricked as he is chomped on, slurped, and swallowed. Seymour inherits the flower shop and is approached by reporters, salesman, lawyers, and agents promising fame and fortune. Seymour rationalizes that he deserves everything being offered to him and feels the fame is what’s earning the love of Audrey (“The Meek Shall Inherit”). However, he knows that it is only a matter of time before Audrey II will kill again and that he is morally responsible. He considers destroying the plant, but believing that Audrey may not love him anymore, Seymour decides to stick with the plant.

As Seymour works on his speech for a lecture tour, Audrey II again squalls for blood. Seymour threatens to kill it just as Audrey walks in asking when Mushnik will return from his sick “sister.” Seymour learns that Audrey would still love him without the fame and decides that Audrey II must die after LIFE magazine comes to the shop. Audrey is confused and frightened by Seymour’s ramblings, but she runs home by his order. That night, unable to sleep and distressed by Seymour’s strange behavior, Audrey goes to the flower shop to talk with him. He is not there, and the plant locks the door and begs her to water him. Not sensing the mortal danger, she approaches to water it, and a vine wraps around her and pulls her in to the plant’s gaping jaws(“Sominex/Suppertime II”). Seymour walks in, realizes what is happening, and rushes at the plant in an attempt to save Audrey. He pulls her out, but Audrey is mortally wounded and tells him to feed her to the plant after she dies so that they can always be together. She dies in his arms, and he reluctantly honors her request (“Somewhere That’s Green” (reprise)). Seymour falls asleep as Audrey II grows small red flower buds.

The next day, Patrick Martin from the World Botanical Enterprises tells Seymour that his company wishes to take leaf cuttings of Audrey II and sell them across America. Seymour realizes what the plant’s evil plan was all along, learning that Audrey II caused the solar eclipse and came to Earth from an unknown planet. He then tries shooting and cutting the plant but its hide is too tough. Next he grabs a handful of rat poison and tosses it in the annoyed plant’s mouth which it spits out with ease. He then runs into its open jaws with a machete planning to kill it from the inside. Seymour is quickly eaten, and only the machete (and in some versions a string of intestines or his glasses) is burped up. Patrick, Crystal, Ronnette, and Chiffon search for Seymour. Not finding him, Patrick tells the girls to take cuttings and signals the truck outside to prepare for loading.

Crystal, Ronnette and Chiffon relate that, following these events, other plants began appearing all over the world, tricking innocent people into feeding them blood in exchange for fame and fortune. They plan the consumption of the entire human population. Out of the fog, Audrey II, bigger than ever, appears with opened red and green flowers revealing the faces of Seymour, Audrey, Mushnik and Orin, who warn that no matter how seductive the plants may be, for the sake of the whole world, one must never do what the plants ask (Finale Ultimo (“Don’t Feed the Plants”)). Audrey II then crawls out using his roots towards the audience and threatens them.*