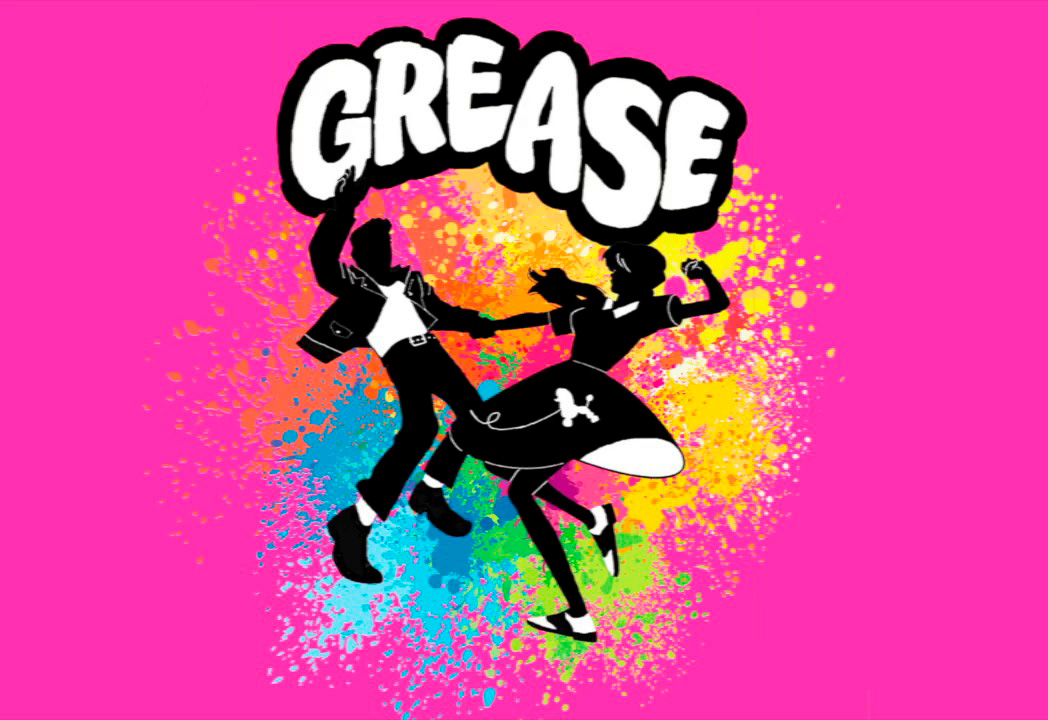 In 1959, Rydell High School’s rebellious, happy, thrill-loving students start a new year. The “greasers” are the Burger Palace Boys and the Pink Ladies (“Alma Mater Parody”). In the revival, the play begins with the T-Birds and the Pink Ladies singing, “Grease (is the Word)”. The start of the new school year means lousy food (“You want my coleslaw?”) and dreaded teachers (“I got Old Lady Lynch for English again. She hates my guts.”). The Pink Ladies sit on one side of the lunchroom, and the Burger Palace Boys sit on the other.

There is a new girl at school, Sandy Dumbrowski. She and the leader of the “Burger Palace Boys”, Danny Zuko, had a brief love affair the summer before, but the summer ended for them with unresolved feelings of love. In describing the fling to the Pink Ladies (Jan, Marty, Frenchy, and Betty Rizzo), Sandy focuses on the emotional attachment she and Danny had, while Danny lies to the Boys (Roger, Doody, Sonny, and Kenickie) about the physical aspects of their relationship (“Summer Nights”). Sandy and Danny soon bump into each other at school, and while Sandy is happy to see Danny, he blows her off, pretending to be too cool. Meanwhile, the kids gather in the hall as Doody, the youngest Burger Palace Boy, shows off his new guitar. Rock star wannabe Doody gives an impromptu concert in the hall (“Those Magic Changes”).

At Marty’s pajama party, the girls experiment with wine, cigarettes, and pierced ears, and talk about boys. Marty tells about her long-distance courtship with a Marine (“Freddy, My Love”). Meanwhile, the Burger Palace Boys are busy stealing hubcaps and teasing Kenickie about his new (used) car (“Greased Lightning”).

Danny sees Sandy again and tries to apologize for his behavior, but she is hurt to find out that he has told his friends that she is “easy.” Head cheerleader Patty Simcox interrupts to prompt Sandy to join the squad and to tease Danny about his latest indiscretions (“Rydell Fight Song”). The kids take their newfangled portable radios for a rock and roll picnic in the park and plan how they will pair off at the upcoming school prom, while Roger shares his love for Jan and his favorite hobby (“Mooning”). Rizzo teases Danny for falling for a girl who resembles the excessively proper teenage ingénue, Sandra Dee (“Look at Me, I’m Sandra Dee”). Sandy realizes that Danny is putting her off to be cool and wishes she had never met him.

Then Danny suggests that Marty go out with Eugene, and she chases after him. The kids declare that they will “always be together” and they will always be friends (“We Go Together”).

At the High School Hop, everyone is dancing, except Sandy (“Shakin’ At the High School Hop”). She is home feeling sorry for herself (“It’s Raining on Prom Night”). Meanwhile the favorite radio DJ of the Burger Palace Boys and the Pink Ladies, Vince Fontaine, is the MC at the dance, which takes place in the gym. He is warming the kids up for the hand-jive dance contest. Kenickie dumps his blind date, Cha-Cha DiGregorio, and pairs off with Rizzo. Danny originally enters the contest with Rizzo, but she instead chooses to dance with Kenickie. Meanwhile, Kenickie pairs Danny up with Cha-Cha despite Danny’s protest. He and Cha-Cha then proceed to win the dance contest (“Born to Hand Jive”). In the revival, Sandy hears the news that Danny and Cha-Cha got up close and won. She feels betrayed but she cannot stop thinking about Danny (“Hopelessly Devoted to You”).

A few days later at the Burger Palace after school, a couple of the guys run into Frenchy, who flunked out of Rydell and has now dropped out of beauty school since she failed all of her classes (“Beauty School Dropout”). Danny, who has taken up track in order to win back Sandy’s affections, does not know that Cha-Cha’s boyfriend’s gang has challenged the guys to a rumble. He is more concerned about patching things up with Sandy at the Twi-Light Drive In, but he moves too fast for her, and she leaves (“All Alone at a Drive-In Movie” (“Sandy” in the Revival)). A couple of days later, the “greasers” are having a party in Jan’s basement, as Doody and Roger sing “Rock ’n’ Roll Party Queen.” Rizzo is worried that she is pregnant, but she is so mad at Kenickie that she tells him he is not the father. Rizzo rejects the kids’ offers of help, especially Sandy’s (“There Are Worse Things I Could Do”). Sandy wonders what she needs to do to fit in at Rydell (“Look at Me, I’m Sandra Dee” (Reprise)).

The next time Sandy meets up with the Burger Palace Boys and the Pink Ladies, she has transformed herself into a greaser’s dream date (“All Choked Up” (“You’re the One That I Want” in the Revival)). Rizzo reveals that she is not pregnant, and she and Kenickie reunite. All ends happily (“We Go Together” (Reprise)).