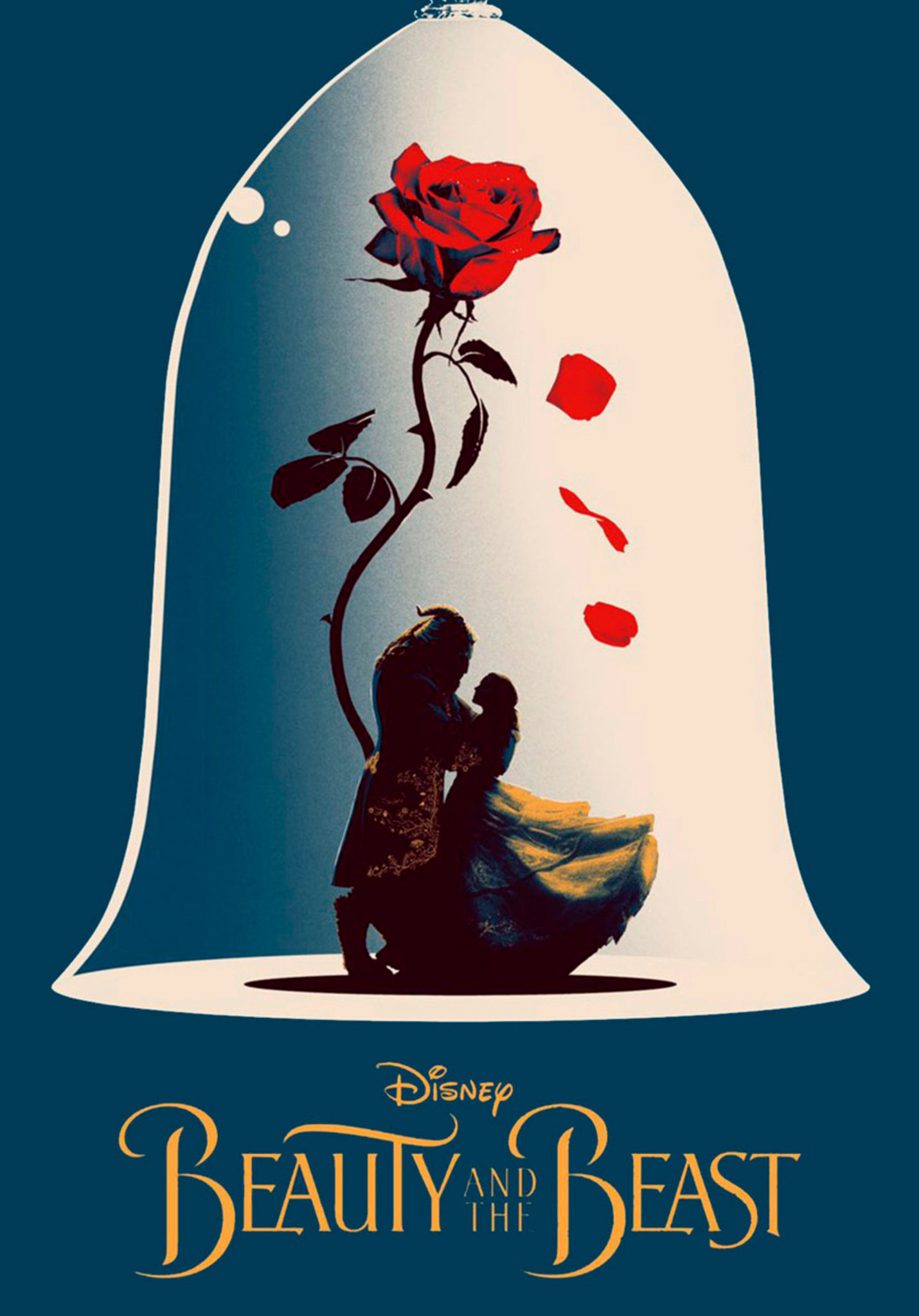 Beauty and the Beast

On a cold winter night, an old beggar woman comes upon a glorious castle belonging to a young prince. She asks the master of the castle to allow her to stay the night, away from the cold, and in return she would give him a single rose, but the prince was vain and uncaring and turned her away solely for her appearance. As he did this, she warned him not to be fooled by appearances, as true beauty lies within, only to be rejected again. Seeing his horrible heart for what it truly was, she transformed into a beautiful enchantress and turned the prince into a hideous Beast and his servants into different objects. She gave him the rose to use as an hour-glass. The one way he could break the spell was to learn to love another and earn her love in return by the time the last petal fell… Years later, a beautiful young woman named Belle makes her way into town one morning in order to get a book from the local book keeper. On the way she expresses her wish to live in a world like her books, full of adventure, while the townspeople note her unparalleled beauty but find her love of books odd (“Belle”). Belle has also attracted the attentions of Gaston the local tavern owner and town hero, who admires her only for her beauty.

Belle, however, is not oblivious to her peers’ views of her. She voices her concerns about it to her father, Maurice, an eccentric inventor, assures his daughter that she is anything but strange and he will always love her (“No Matter What”). The two then put the finishing touches on his invention and Maurice heads off to an invention fair donning a scarf knitted for him by Belle (“No Matter What (Reprise)”).

In the woods, Maurice becomes lost when a pack of wolves attacks him; he finds his way to a mysterious castle on the edge of the Crossroads and enters. The servants (Lumiere, a maitre’d turned into a candelabra, Cogsworth, the head of household turned into a clock, and Mrs. Potts, the head of the kitchen turned into a tea pot) welcome him but the castle’s master, a horrid Beast, arrives and orders Maurice to be locked away for trespassing.

Back in town Gaston proposes to Belle, which she politely rejects (“Me”). Appalled by Gaston’s forwardness, Belle once again voices her need for a life outside this provincial one (“Belle (Reprise)”). Gaston’s sidekick, Lefou, returns from the woods in a familiar scarf. Belle realizes her father is in danger and heads into the woods to look for him. She ends up at the castle were she finds her father locked away in a dungeon. She makes a deal with the Beast, Maurice goes free but she remains in his stead. They agree and Maurice is sent back to town without being allowed to say goodbye. Belle is given a guest room and ordered by the Beast to join him for dinner. She mourns her situation (“Home”), but Mrs. Potts and Madame de la Grande Bouche, an operatic wardrobe, attempt to cheer her up (“Home (Reprise)”).

Back in town, Gaston sulks at his loss of a bride. The patrons attempt to cheer him up (“Gaston”), when Maurice rushes in claiming a Beast has Belle locked away, they laugh at him but Gaston formulates a plan (“Gaston (Reprise)”). Back at the castle, the Beast grows impatient as Belle has yet to join him for dinner. Cogsworth informs him she refuses to come, after a shouting match between Belle and the Beast (which ends in a victory for Belle) he tells her if she cannot eat with him then she will not eat at all. In his quarters, he sulks and notes his fate should the spell not break (“How Long Must This Go On?”). Eventually Belle does become hungry and ventures into the kitchen where the servants offer her dinner despite their master’s orders. They treat her to an amazing cabaret show (“Be Our Guest”).

After dinner, Belle gets a tour of the castle courtesy of Cogsworth and Lumiere, her curiosity leads her to enter the West Wing, a place the Beast told her was forbidden. Mesmerized by a mysterious rose floating in a bell jar, she reaches out to touch it but before she can, the Beast stops her and orders her to get out and rips her sleeve in the process. Appalled that he has touched her she flees the castle fearing for her life. Realizing his deadly mistake the Beast knows he will be a monster forever if he cannot learn to love her (“If I Can’t Love Her”).

In the woods, Belle is attacked by wolves and is only rescued when the Beast comes to her aid, but he is injured during the fight and Belle helps him back to the castle instead of taking the chance to run home. She cleans his injuries and after a brief argument about whose fault this is, the Beast thanks her for her kindness and thus their friendship is born. Wanting to give her a thank-you gift, the Beast gives Belle his huge library, which excites her. She notes a change in the Beast’s personality as the servants note a change in Belle and the Beast’s relationship (“Something There”). They express their hope of being human once more (“Human Again”) while Belle asks the Beast to accompany her to dinner that night.

Back in the village, Gaston meets with the asylum owner Monsieur D’Arque. They plan to lock Maurice away to blackmail Belle into marrying Gaston (“Maison de Lunes”). In the castle, the Beast and Belle attend a lovely dinner and personal ball, where they dance together in the ballroom (“Beauty and the Beast”). After, the Beast (who plans to tell Belle he loves her) asks her if she is happy here, she responds positively but notes that she misses her father. He offers her his Magic Mirror to view him: he is sick and lost in the woods. The Beast allows Belle to leave in order to save him; she departs after a tearful goodbye (“If I Can’t Love Her (Reprise)”).

Belle finds her father and brings him back to their house in the village. After she is able to nurse him back to health she explains the transformation she seems to have gone through while with the Beast (“A Change in Me”). A mob arrives, led by Gaston to take Maurice to the asylum. Belle proves her father’s sanity by showing the townspeople the Beast is real using the Magic Mirror but doesn’t realize the error in her gesture. The townspeople immediately fear the Beast, Belle insists he’s gentle and kind, Gaston catches her tone and recognizes the Beast as his rival for Belle’s affections and organizes the mob to kill the Beast (“Mob Song”).

At the castle, the objects are able to keep the lynch mob at bay but Gaston breaks through and finds the Beast in his tower. He engages in a fight with him, mercilessly beating him and taunting him. The Beast has lost the will to live at Belle’s departure and Gaston moves in for the killing blow when Belle arrives, the Beast immediately turns on Gaston but spares his life. The Beast and Belle are reunited just as Gaston plunges his dagger into the Beast’s back but loses his footing and falls to his death.

On the balcony Belle assures the Beast he will live but they both know she is helpless to save him. She begs him not to leave her because she has found home in his company (“Home – Reprise”), but despite this, he dies; Belle sobs on his body and says she loves him just before the last petal falls. A transformation takes place and the Beast is alive and human once more. Though Belle does not recognize him at first, she looks into his eyes and sees the Beast within and they kiss. The two sing of how their lives have changed because of love and they dance once more as the company, now changed back to their human form, gathers in the ballroom (“Transformation/Finale").