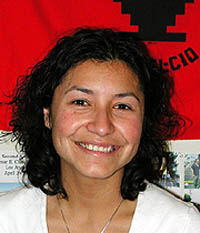 The granddaughter of civil and labor rights activist Cesar Chavez, human rights activist and diversity speaker Julie Chavez Rodriguez was introduced to the farm worker movement from an early age. Throughout her life, she has played an active role in the fight for social justice, human rights, and the rights of working people. Chavez Rodriguez is currently the programs director for the Cesar E. Chavez Foundation, where she spearheads the National Youth Leadership initiative, an effort which addresses academic and civic engagement among today’s youth.

Julie Chavez Rodriguez has also worked with the state of California on the development and administration of the Cesar Chavez Day of Service and Learning, and a web-based K-12 curriculum on the life and work of Cesar Chavez. Prior to joining for the foundation, she worked with the United Farm Workers on voter registration and community empowerment programs throughout California. Chavez Rodriguez holds a bachelor’s degree in Latin American studies from the University of California at Berkeley.