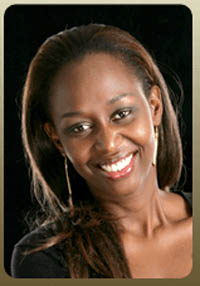 Immaculée Ilibagiza is a living example of faith put into action. Immaculée’s life was transformed dramatically during the 1994 Rwandan genocide where she and seven other women spent 91 days huddled silently together in the cramped bathroom of a local pastor’s house. Immaculée entered the bathroom a vibrant, 115-pound university student with a loving family – she emerged weighing just 65 pounds to find her entire family had been brutally murdered (with the exception of one brother who had been studying out of the country). Immaculée credits her salvage mostly to prayer and to a set of rosary beads given to her by her devout Catholic father prior to going into hiding. Immaculée’s strength in her faith empowered her to stare down a man armed with a machete threatening to kill her during her escape. She also later came face to face with the killer of her mother and her brother and said the unthinkable, “I forgive you.” Immaculée knew, while in hiding, that she would have to overcome immeasurable odds without her family and with her country destroyed.

In 1998, Immaculée immigrated to the United States where she continued her work with the UN. During this time she shared her story with co-workers and friends, who were so impacted they insisted she write it down in book form. Three days after finishing her manuscript she met best selling author, Dr. Wayne W. Dyer, who, within minutes of meeting her, offered to publish her book. Dyer is quoted as saying, “There is something much more than charisma at work here – Immaculée not only writes and speaks about unconditional love and forgiveness, but she radiates it wherever she goes.”