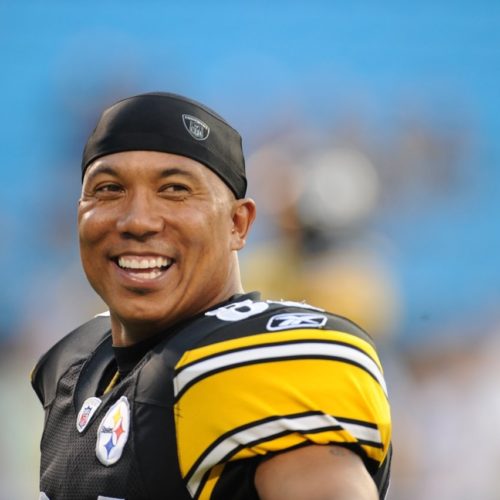 When you talk about Hines Ward, you are talking about perhaps the greatest wide receiver in Steelers’ history and certainly the best blocking wide receiver in NFL history. If you have any doubts, let’s go over his accomplishments: he owns every receiving record in franchise history, he is a 2-time Super Bowl Champion, the MVP of Super Bowl XL, a 4-time Pro Bowler, all-time team leader in receptions, receiving yards, and receiving touchdowns, he is the only receiver in Steeler history to surpass 1,000 receiving yards for four straight seasons, and was named to the Steelers’ 75th Season All-Time Team, to name just a few. To top it all off, on New Years day 2012, Hines became only the 8th player in NFL history to reach 1000 career receptions on what would be his last catch ever as a Pittsburgh Steeler.

In case you are wondering about the man off the field, Hines Ward has been equally impressive. He is a man of character in his community both locally and worldwide. He was named the Steelers’ “2008 Walter Payton Man of the Year.” Other recognitions Ward has received include being featured as ABC’s “Person of the Week,” meeting and befriending four world leaders – two U.S. Presidents and two Korean Presidents, founding and driving his Helping Hands Foundations both in the U.S. and Korea, being an active participant with numerous other foundations including The Caring Foundation, the Cystic Fibrosis Foundation, and Pearl S. Buck International. Ward has also started his own after school education program for kids in his home state of Georgia. He has been featured on the cover of numerous publications such as Newsweek, Time Magazine, Esquire, Sports Illustrated, Moves Magazine, and Whirl, and was featured as one of GQ’s 2009 “Men of the Year.” On May 24, 2011, dance-stepping far outside his comfort zone, Hines, along with his partner Kym Johnson, won season 12 of ABC’s hit dance competition “Dancing with the Stars”, bringing home the Mirror Ball Trophy to Steeler Nation. Ward appeared as guest correspondent for the NFL Network’s Rich Eisen Podcast at the 84th annual Academy Awards, catching up with the likes of George Clooney on the Red Carpet, and debuted as a member of the fictional Gotham Rogues football team in the Batman film “The Dark Knight Rises.”

Tough. Confident. Passionate. Intense. Uncompromising. Persistent. All these words apply when you talk about Hines Ward, particularly when it comes to the game of football and life in general. Nobody in the game is as willing to sacrifice himself and do all it takes to win a football game, and nobody plays the game or enjoys life with more unbridled joy. Pure and simple, Hines Ward is special.