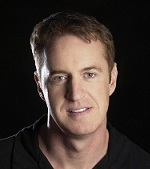 Cullen has been described as a cultural translator, writing about Evangelical Christians, gays in the military, Barbie doll collectors . . . anyone on the margins. He has contributed to New York Times, Newsweek, Times of London, Washington Post, Slate, Salon, Daily Beast and Guardian.

Cullen spent ten years writing and researching Columbine. He was driven by two questions: why did they kill, and what became of the survivors? The surprise was that most of what we “know” is wrong. It wasn’t about the jocks, goths or the Trench Coat Mafia. The killers didn’t even see themselves as school shooters: their primary focus was the bombs.

Dave began writing as a young boy in the Chicago suburbs. He dove passionately into journalism in high school and college, then wandered. He became an infantry soldier, management consultant, computer systems analyst and undergraduate instructor in scattered cities across the U.S., England, Kuwait and Bahrain. He traveled to 26 countries, with a penchant for North Africa and south Asia.

At 33, Dave devoted himself to writing full-time. He began with the University of Colorado-Boulder’s writing program, where he won the Jovanovich Award for best master’s thesis. He later won a GLAAD Media Award, an SPJ Award and is an Ochberg Fellow at the Dart Center for Journalism & Trauma: at Columbia University’s Journalism School.

Columbine won the Edgar Award, Barnes & Noble’s Discover Award, the Goodreads Choice Award, and several others. It spent thirteen weeks on the New York Times bestseller list, and made two dozen Best of 2009 lists, including the New York Times, LA Times and Publishers Weekly. Columbine was declared Top Education Book of 2009 by the American School Board Journal.

Dave was planning a move to New York City when Columbine happened. He remained in Denver eleven more years to research, write and promote the book, and moved to Hell’s Kitchen in NYC in July 2010. He is happy there. He travels extensively to high schools and colleges to teach writing and discuss the tragedy. He is working on a book about two gay colonels, who he has followed for twelve years.