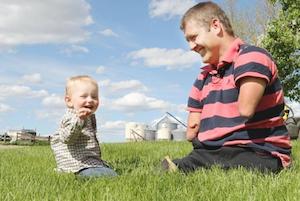 He’s a farmer at Apricot Lane Farms in Moorpark, Calif., and has been farming his entire life. It’s a physically demanding career that Chris handles with deceptive ease, but his life is still comprised of physical limitations: He can’t drive legally, he can’t weed-whack, he can’t operate a chainsaw, he can’t swim (“You drop a bowling ball and me in the water at the same time, I will beat the bowling ball to the bottom nine times out of… nine!” he jokes) and he can’t complete everyday tasks without exerting far more energy than most.

That’s because Chris was born without arms or legs.

Immediately after his birth, Chris’ grandmother set the tone for his life. “My uncle phoned my grandma and grandpa to let them know that my mom and dad had a baby boy – healthy, but not everything was there. My grandma didn’t even hesitate for a second. She said, ‘Well, Bruce [my dad] never did finish anything he started,’” Chris laughs.

Ever since, Chris has exhibited extraordinary independence, eagerly working on his parents’ farm and often refusing to wear his prosthetic arms at school. His parents treated him exactly as they would a child without any physical disabilities. Chris credits this approach with shaping his attitude today.
And as the staff at Apricot Lane Farms quickly discovered, there was very little Chris couldn’t do – farming or otherwise.

He operates a tractor, rides a skateboard, writes and much more. Not only has he overcome the physical challenges of his life, but Chris has also gracefully navigated its most awkward moments.

“I was handing out Halloween candy one year and the kids were like, ‘Aw, awesome costume!’” he says, smiling. “I’m wearing jeans and a T-shirt!.. Come back here on the first of November, I’ll be wearing the same thing.”

What’s at the heart of Chris’ sense of humor, positive outlook and steadfast determination? The simple acceptance he has for himself.
“Some people are ashamed of their freckles. Some people are ashamed of that spare tire around their waist. They have big ears or a big nose,” Chris says. “I think if you’re worried about how you look, you’re cheating yourself out of opportunities.”