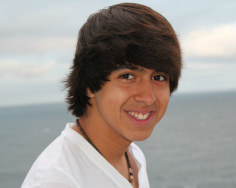 My name is Amit and I am a 14 year old boy from Los Angeles, California. I have gone to both middle school and now high school at a local school in the suburbs of Los Angeles, and am now a freshman in high school. I have grown up in a very positive environment, positive family, positive friends and just a positive attitude in general. My dad and mom own their own business and also speak at various events all across the country. I grew up with lots of opportunities to go out and get involved, from baseball lessons to tae kwan do, my parents always wanted me to go out there and find something that I love to do, find my passion. I sincerely wouldn’t replace my life for anything, don’t get me wrong, but here is my story…

From an early age, I had a little speaking problem. Well, my parents made it seem little (positive attitude) but essentially, if I tried to say the word “cat” it would come out as “tat,” if I tried to say the word “God” it would come out as “Dod” and if I tried to say the word “rex” it would come out as “res,” you get the whole idea. It was cute till i was about 3 or 4, but then it actually started to get serious. At around 6 or 7 years old my parents signed me up for speech lessons, with a therapist at one of the local schools nearby. I remember going through weeks of unproductive and quite agonizing lessons from this teacher who really didn’t know what to do about me. But nevertheless, the lessons must have helped a little bit, but it still never fixed the problem for me. Whenever I would meet a new person and say a phrase like “Tan I get you something?” I would get the same reaction, “what!?” Even in class, when someone would sneeze I would go “Dod Bless you,” the reaction would be “excuse me?” It never necessarily bothered me at first, but slowly it kind of got to my head a little bit. Of course I would have my close friends, who would tell other people about my whole speech issue and what not, but I sort of just tended to keep quiet about it. My parents kept telling me it has to get fixed, and even family members would always kind of give me that awkward look when I pronounced a word wrong.

Then came the time when I actually had to speak in PUBLIC. I remember the first time I went up to say a few words to my parents business partners after one of their meetings, I sat down for hours trying to write my speech (this was when I was in 5th grade) and I thought I had it all down. As soon as I began talking, I started jittering, and shaking, and then of course you could see some tears running down my eyes. Oh well needless to say, those 3 minutes lasted a long, long while for me. Furthermore, when I was in 6th grade my parents had just received this great recognition in San Jose, and one of their friends asked me to share a few words at the surprise party they were having at that time. Unwillingly, I walked onto the stage, stared at the 100 or so people that were in the audience and my mom and dad – next thing I know I started balling while running off back to my hotel room. They were shocked, I mean my dad was a public speaker, everyone thought it would be almost natural for me to be the same, but of course it wasn’t. The speaking problem and even the inability for me to speak in public were almost absurd for any of my friends or family to comprehend. The only person who did not think it was that bad, was myself. It was quite frustrating, having to explain to my friends why I couldn’t say words correctly, and seeing all my family help me with speaking. Yes, I was embarrassed, but I, for some reason had some feeling in my gut that it didn’t matter if I stumbled on my words, it didn’t matter if I couldn’t pronounce my c’s or k’s or q’s or z’s or g’s or x’s correctly, it didn’t matter that my hand or leg would shake uncontrollably whenever I was behind a podium. Ha, and I was only 10.

I kept on doing little 3 minute speeches, but every time those tears would still boil up in my eyes. Even in 7th grade I would have some people joke around about the way I pronounced some words, and yes I knew they were “just kidding,” but it was a little bit obnoxious at one point. The process continued on and on and on, and then at one point I had to prove that I was better than what it seemed. Towards the end of 7th grade, I had Mock Trial and Debate tryouts for my 8th grade year. I was a little iffy on whether or not I should do it, mostly because I just didn’t want to look bad in front of everyone, but after a long conversation with my parents I decided that I should do it. Little did I know, I just made the decision that would change my entire life for the better. I made it! Come 8th grade, my coaches said that it would be time to determine roles, meaning who is who in the trial. My one time being the defense attorney and delivering a 5 to 6 minute speech, staring right into the quite piercing eyes of my coach, my hand was shaking as I delivered the entire thing. By the end of it, I was totally shaken up to the point where my coach asked me if I was okay afterwards. Long story short, I got the part, i don’t know how but I did. My team made it all the way to the final round in the L.A courthouse. On the way their my coach told me “Amit, the first time you delivered that closing argument, I NEVER thought you would come this far, but it was her (the other coach) who saw some potential in you.” We ended up winning the entire competition and I always got a perfect score every round. That experience changed my life, it gave me hope, and helped me see my own true potential. Well, debate season rolled along, and by the grace of God, my team ended up placing 5th at Nationals, and I took the 11th place speaker award in the nation. That year, literally changed me as a person. I owe it of course to my coaches, who stood beside me and guided me, but they really sparked a fire in my heart that burns till this day. Now, in high school, I’ve competed in 5 debate tournaments, and have placed as one of the top speakers in 4 out of 5 of them. To this day, I still get the occasional “What did you just say?” after I say the word God in religion class, I still hear people asking me “Amit why do you shake so much when you speak in public?” But now, that all doesn’t matter. All the frustration, all the tears, all the jokes that used to happen, they all were part of the journey. MyStory isn’t about my success, it is about my progress. I am blessed to say that my biggest weakness, has now become my biggest strength.